Let's continue praying and watching Online Masses through our YouTube channel; by clicking the following image

Kojimachi Catholic Church is centrally located in Tokyo, at Yotsuya; it is more often called St. Ignatius Church. It is an international church. On Sundays masses are celebrated in various languages for the different nationalities attending mass here.

The predecessor of the present St. Ignatius Church was “St. Therese of the Child Jesus Church” which was established as a small parish church of Tokyo in 1936. In May 1945 a massive air-raid struck Tokyo and this church burned down completely. The Kulturheim Chapel of Sophia University was temporarily used as a replacement church.

In 1947 the Archdiocese of Tokyo asked the Society of Jesus to rebuild Kojimachi Church which was then dedicated to St. Ignatius of Loyola. Construction was completed and the dedication ceremony was held in 1949. Construction of the present St. Ignatius Church was completed in 1999. A bigger new church was needed because the older church had deteriorated and there had been a rapid increase in the number of parishioners.

The statue affixed to the wall of the main chapel depicts Christ’s resurrection after overcoming suffering and death. Both hands are extended as a gesture of warm welcome to all who come into the church.

An Environmentally Sustainable Lifestyle
We pray that we all will make courageous choices for a simple and environmentally sustainable lifestyle, rejoicing in our young people who are resolutely committed to this.

A new Journey in the John de Britto English Center 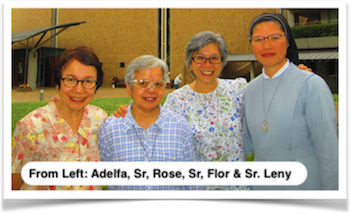 Our warmest welcome to all those who worship with our parish family, whether after a long time or newly arrived. If you wish to register, please do so at the Church Office (japanese site http://www.ignatius.gr.jp/contact.html).